Hey, it's Brian Koehn here with another post from ClientPoint's Sales and Marketing Innovation Lab. If you're a sales leader or in sales in any way, you won't want to miss this one.

Today we're going to be talking about another FBI hostage negotiation principle that you can use in your sales process today. And this comes from the book, Never Split the Difference by Chris Voss, one of the best negotiation books of all time.

Now, Chris Voss was the Head of FBI Hostage Negotiation for 20 years, and one of his very favorite principles that he talks about is a concept called mirroring. In the book, he actually says,

"If there were such thing as a Jedi mind trick in negotiation, it would be this. The principle of mirroring."

See how ClientPoint can help you close more deals, Schedule a Demo now.

Mirroring is when you repeat back to somebody the important key words of what they said in a sentence. Now in sales, this is critical, because you're hearing information all the time. You're hearing words and you're hearing phrases that may not be new to you. But these words and phrases can mean a lot of different things to different people that share them.

For example, I may be in a sales process with a prospect named Dave. And I could be at the point where 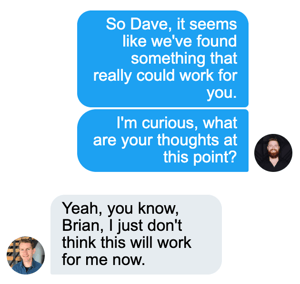 I'm trying to get some early buying signs from him, to see if I can help him, and also to see what his level of interest and capability is in making a deal happen.

So I might say something like, “So Dave, it seems like we've found something that really could work for you. I'm curious, what are your thoughts at this point?”

And Dave might respond, “Yeah, you know, Brian, I just don't think this will work for me now.”

REPEAT BACK THE KEY WORDS 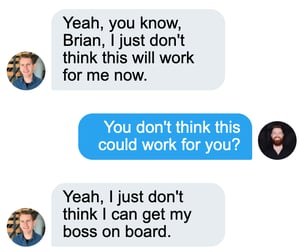 To which he might respond, “Yeah, I just don't think I can get my boss on board.”

So by mirroring those key words back to him, "I don't think this will work for me." I now discovered that he feels he can't get his boss on board. That's critical for me to know as a salesperson in order to be able to help Dave move forward with making this product or service possible for him and his business.

Alternatively, you might say something like this. “Dave, I think this could possibly really help you. What are your thoughts at this point?” 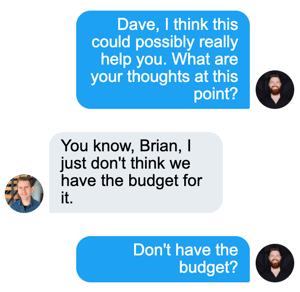 And he responds, “You know, Brian, I just don't think we have the budget for it.”

To which you would respond, “Don't have the budget?”

And when you say, "Don't have the budget", that's going to prompt Dave to share exactly what he means by that. You see, some people are going to say, "I don't think this will work for me" or "I don't have the budget." And it could actually mean several other things than what we think it might mean.

When your prospect says, "This might not work for me" "I don't have the budget", or "I don't think it'll work." They could mean,

“I don't feel like I'm smart enough to figure it out.”

“My boss won't let me make this work.”

“My team might not listen to me and it won't work.”

"I think my business is too unique for you to help me."

"I need to prepare more on my end to make this work."

"I have way too much going on at work to make this work."

And really so much more.

In the instance that we demonstrated earlier, it had to do with a boss, but it could have meant just about anything. And using a mirror in sales and in negotiations, will give you the power to understand what's really going on in your prospect's mind so you can truly help them, negotiate, and close the deal.

Schedule a Demo to learn how ClientPoint can help you take mirroring to the next level and close more deals.

Let's face it, as sales professionals we all dislike sales slumps. Are you in one now? Unfortunately, in some cases, a sales slump can lead to other . . .
Read More

Why Some Sales Tools Decrease Sales

Did you know that some sales tools and sales trainings have actually been proven to backfire and decrease sales. Today we'll talk about why that is . . .
Read More

The Best Way To Connect With Your Prospects

Today, we’re going to be sharing with you the best way possible for you to connect with your prospects. It's not what you think and it's not anything . . .
Read More